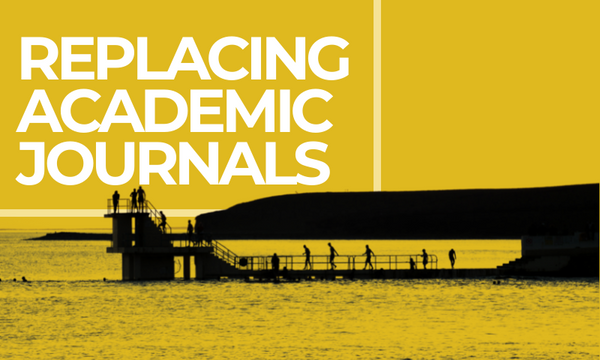 In this talk Björn Brembs made the case of why and how the current academic publishing ecosystem needs to change.

The idea is not new, after all, the internet is from 1990, but journals are from 1664. What is new is a proposal that specifies how a modernization from 17th century paper journals to a 21st century infrastructure can happen despite the current lock-in situation.

Björn presented a proposal by ten experts, arguing that the lock-in requires support from outside. The experts have identified anti-trust/procurement regulators and funding agencies as potential facilitators for breaking the lock-in. In the face of new technical and social developments, regulators are now free to abolish the long-standing single-source exemption from procurement rules that was the basis for library-publisher negotiations. Funding agencies may modernize their eligibility criteria for fundable institutions to include modern infrastructure (servicing not just texts, but also data and code), thereby instructing and incentivizing institutional modernization and redirection of funds from antiquated paper journals towards a modern information infrastructure. This infrastructure is proposed to be governed by the scholarly community and to operate analogous to the same, tried and tested way other, non-digital infrastructures operate: institutions decide how much service is performed in-house and how much is awarded to external providers after a bidding process.

Ownership involves socially recognized economic rights, first and foremost the exclusive control over that property, with the self-efficacy it affords. The inability to exert such control over crucial components of their scholarly infrastructure in the face of a generally recognized need for action for over three decades now, evinces the dramatic erosion of real ownership rights for the scholarly community over said infrastructure. Thus, this proposal is motivated also by the now very urgent need to restore such ownership to the scholarly community.